Get fresh music recommendations delivered to your inbox every Friday.

by Freedom To Spend 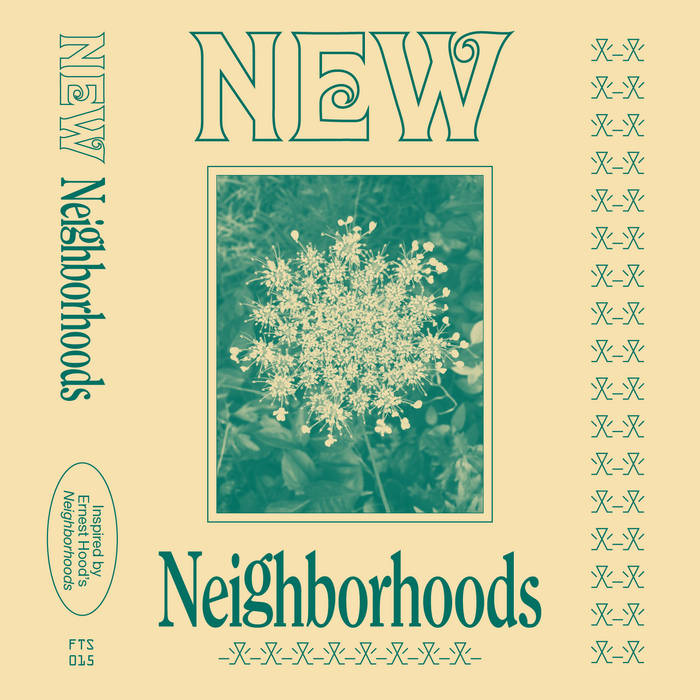 Dano Williams Incredibly high quality. One of the best compilations I know. I dearly wish the cassette hadn't sold out in, like, less than a day.

arbutusboi True inspiration. if we aren't listening to and creating with what is around us what's the point. Favorite track: Saint-Gilles Lockdown in Three Parts.

In recognizing and celebrating mutual communities, and with ambition to both envision a better world and hold onto precious local histories, Freedom To Spend shares New Neighborhoods, a collection of sixteen new works by an international, intergenerational cast of artists acknowledging, and pushing forward, the sonic path traveled by Ernest Hood, the musician and field recordist from Portland, Oregon responsible for the 1975 “joy in reminiscence” Neighborhoods.

The liner notes for the original edition of Neighborhoods clarify that the album “is a rather personal thing to be reflected up (as musical cinematography) alone.” New Neighborhoods nurtures a similar independence that slowly ignites sensory tinder in its poetic unfolding. The composers’ interior terrains interact with their adjacent landscapes, from Harlem to The Hague, compelled by a mysterious, unconscious force. The sounds captured and considered in this collection shimmer under the intimate, extraordinary depiction of everyday life.

There is a sensitivity to detail in the artists’ submissions, which are neither strictly field recordings or ambient music, but rather an environmental tapestry of both. While many of the songs were composed in solitude, they invite the listener to imagine being there, exploring a parallel environment familiar yet obscured. As a whole, the collection suspends sound in lucidity; the dream-reality of these recordings unravel and then immediately rewind before the listener, encouraging new rituals of perception.

All proceeds from the first edition of this collection will benefit the Association for Neighborhood and Housing Development (ANHD)’s Center for Community Leadership (CCL) program, one of New York City’s longest-running organizer training programs, providing grassroots leaders and organizations with the skills, resources, and community necessary to advance sustainable political change on a local and regional level. ANHD is a coalition of community groups across New York City using research, advocacy, and grassroots to build equity and justice in their neighborhoods and citywide. ANHD’s mission supports lower income and working-class communities by developing affordable housing, an essential effort during the COVID-19 pandemic, where low-income, BIPOC communities have been hit the hardest. Member organizations of ANHD have provided 80,000 units to this date, and homes for almost 100,000 people.

New Neighborhoods is a dose of awakening, extracted by a group of artists who share their inner process with us and from us. A new kind of togetherness. A limited cassette edition of New Neighborhoods will be made available on October 2, 2020 from Freedom To Spend and RVNG Intl. alongside digital formats.

All proceeds from the first edition of this collection will benefit the Association for Neighborhood and Housing Development (ANHD)’s Center for Community Leadership (CCL) program, one of New York City’s longest-running organizer training programs, providing grassroots leaders and organizations with the skills, resources, and community necessary to advance sustainable political change on a local and regional level.

Roberto Carlos Lange - A worm in an apple
Recorded in Bed-Stuy (Brooklyn, NY)

Like A Villain - What’s happening to me
Recorded in Brooklyn and Queens, NY

less is more, more or less

Bandcamp Daily  your guide to the world of Bandcamp

Kari Faux drops off her deluxe album 'Lowkey Superstar' plus tunes by Shunaji and Samplelov.